for scoliosis and spinal deformities

The Orthopaedic Rehabilitation clinic in London provides treatment for children and adults, with Spinal Deformities, from all over the world. We offer a unique, high-quality, non-surgical therapeutic treatment, which is based on the  Schroth method,the Dobosiewicz method and the dr Jacques'a Chêneau bracing protocol. Various other techniques implemented in to Joanna's Słup conservative approach to treat scoliosis help to achieve the best result for individual patient.

In 2000 Joanna Slup obtained her Master of Science Degree in Physiotherapy, and she dedicated her time to learning about scoliosis from the best professionals in the field including: Christa Lehnert-Schroth and Dr. Jacque Cheneau.

Joanna has had the good fortune of studying the most effective non-surgical treatments for scoliosis such as the Schroth method, the Dobosiewicz method,  Osteopathy, Bracing and various other techniques.

During 19 years working with patients with spinal deformities Joanna created her unique holistic and comprehensive approach to treating scoliosis and other back problems.

Other treatments focus only on the spine, but our approach addresses the human being as a whole.

Christa Lehnert-Schroth and memory of her mother Katharina Schroth 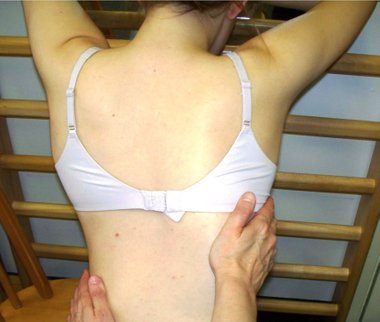 Joanna Slup has the longest experience (over 19 years) in treating patients with Spinal Deformities than any other non-surgical treatment provider in the UK.

The sooner the condition is diagnosed, the better are the chances of effective treatment.

Signs of scoliosis to watch out for:

E/ When walking, you don't swing your arms equally. It can be caused by the curvature and the rotation in your spine. 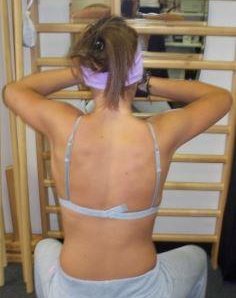 Joanna I just want to thank you for what you have done. It has been a very good experience for me that will help me out in my entire life. You have been fantastic. I ould not thank you enough.

You are an amazing person and I wish you all the bast. I promise I will continue all my exercises!

Before I came to Scoliosisinlondon, my posture was very bad and I had a lot of back pain. I was nervous about starting my 4-week treatment, but everyone was very friendly. The treatment was intense, but I enjoyed doing the exercises and felt the benefits and now get less pain. When I saw my before and after photos there was an improvement, and I am very pleased with the results. Thanks.

Thank you very much for helping me improved my scoliosis. Your time + help is very appreciated. i know all about my scoliosis now and will keep doing my exercises. Thank you for the encouragement + support. These two weeks haven'tjust helped my back, they've brought happiness and friends as well. It was nice to work alongside other people like me. Thank you once again.

Thank you for working so hard with me, encouraging me, and pushing me through the pain and hard days. It's been a pleasure meeting you and working with you. It has been a month that I will never forget and promise you to do everything possible to keep my result. You are someone who can never be forgotten! Wishing you all the best and success in life!

Thank you for all the knowledge, motivation and expertise that you have given me over the past two months. Your highly enthusiastic approach and professionalism was made a lasting impression that will stay with me forever. Words cannot describe how grateful I am to you for giving me such an excellent result. I have thoroughly enjoyed my time with you, Frankly and Billie. Thank you once again.

I just want to thank you for what you have done for me. I really enjoyed the physio with you!

I hope you will remember me and maybe we see each other in Bad Sobernheim one day!

We would like to thank you for all the care and attention you gave to Selma during her stay in London. Her spine improved a lot which is surely due to the professional physiotherapy she received from you. We wish you all the best.

scoliosis exercises in a group Scoliosisinlondon

To develop a familiarity with the human skeleton; To understand the information potential and limitations of human bone analysis; Learning outcomes. By the end of the module, students should be able to: Be familiar with human anatomy and learn the names of the bones in the human skeleton; Assess age and ...

We provide outstanding outpatient treatment in a friendly atmosphere, to patients suffering from Spinal Deformities. Our treatment is based on scientific knowledge and an individualized exercise program is scientifically adapted to all aspects of the conservative treatment of scoliosis based on the most current research, and is continuously evolving with the introduction of new knowledge from the scientific literature.

The patients exercise in groups, however, each patient receives his/her own program based on age, degree and pattern of curvature. Individual treatment and massage complete the daily schedule. Treatment decisions should be individualized considering the probability of curve progression, based on curve magnitude, skeletal maturity and patient age. Treatment acceptability should also be considered. The treatment program consists of correction of the scoliotic posture with the help of proprioceptive and exteroceptive stimulation. Exercises are supported by “rotational breathing” exercises. By selective contraction of convex areas of the trunk, the inspired air is directed to the concave areas of the chest and the ribs to lengthen and mobilize soft tissues in these regions. The patients learn an individual correction routine, corrected breathing pattern and active 3D self-correction. Active 3D self-correction is accomplished first through patient education and increasing the patient's awareness of their deformity. Once the patient is aware of his/her deformity and the changes required correcting it, the patient is able to consciously make adjustments to his/her posture.   Osteopathic manipulation, mobilization, myofascial release, acupuncture and kinesiotaping are available for patients, as needed. Female patients wear bikini tops during all sessions. Wall mirrors enable the patients to self-monitor progress at all times to facilitate optimum correction.

In children and adolescent, active 3D self-correction is the key to treatment in order to reduce the progressive deformation of the vertebrae while the spine is still growing. Bone plasticity ends at the end of skeletal growth and bone vertebral deformities are fixed. For this reason, the primary treatment goal in adults is not to realign the spine and reduce the magnitude of the curve, but rather, to stabilize the spine and prevent further curve progression. The purpose of exercises for adult patients is not to reduce curve magnitudes as in children and adolescent, but rather to stabilize the spine and prevent curve progression.

Requirements for coming to our cente:

At the end of an intensive course of treatment patients should be capable of assuming their personal corrected postural stereotype without the assistance of a physiotherapist and without mirror control and be able to maintain the position during activities of daily living.

After the intensive treatment course, patients receive a home program of exercises to perform them daily in order to maintain the improved postural balance.

International Intensive Treatment Courses for patients from UK, USA and children and adults from all over the world are:

4 weeks or 2 weeks from Monday to Friday

We are looking forward to welcome you in our centre!

I saw this duck and thought “what great elongation!” then I made sure I corrected my posture! This is just one example of how this extraordinary month with you has had such a massive impact on me. I've been though every emotion in this room, I'll miss it! Joanna you are amazing — your dedication, knowledge and passion are inspirational, and it will be your voice (“6 more”, “head back”) in my head, driving me to keep up the amazing work you've started. Thank you so much, not only for what you've done over the last 4 weeks, but for the gift of knowledge and confidence in the techniques I can use for the rest of my life. 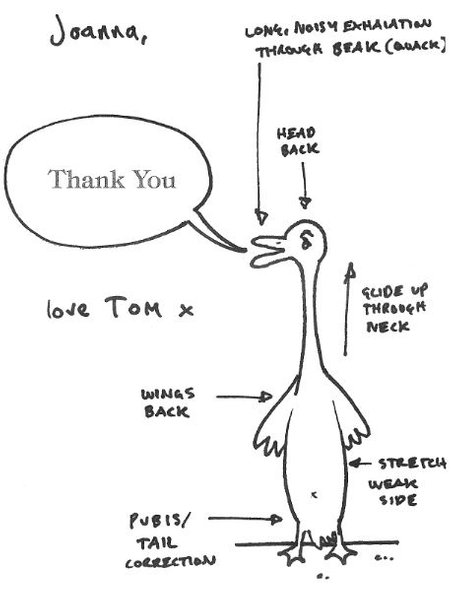 What is physical therapy?

Consultations are by appointment only.